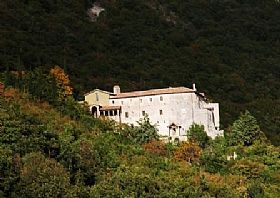 Italy's patron saint is the revered and pacific Saint Francis of Assisi. Known for his naturalistic views and peace-making affirmations, Francis didn't limit his ministry to his hometown. He and his followers wandered through the central regions in search of serene spots to contemplate nature and the heavens, to pray and reflect, and to spread their gospel of simplicity to others. The Valle Reatina, a high mountain valley in Lazio, was one of their favored retreats. The unspoiled surroundings are still sought after for pilgrims seeking solitude and the relaxing power of nature.

The hills and valleys are an ideal itinerary for those who want to retrace the saint's steps, or who just enjoy long country walks in the tranquil splendor of the great outdoors. The trail can be completed on foot, bicycle, horseback or by car, though certain tracks will have to be hiked. The paths are well-signed with wooden trail markers. More detailed information can be found at the Via di Francesco website.

Start the itinerary in Rieti, an historic city and provincial capital near the Umbrian border. An important Roman city, Rieti preserves many ancient monuments, including a fascinating network of underground viaducts. Traces of the city walls, ancient gates and grand palaces make it an interesting place to explore. There are piazzas teeming with life and medieval streets to meander. The tourist office in via Cintia offers maps of the St. Francis Walk along with a Pilgrim's Passport that you can have stamped at each of the important sanctuaries along the way. All the Franciscan spots skirt the city.

Francis and his followers arrived from Assisi in 1223, walking through Umbria by way of Spoleto, Cascia and Leonessa, then arriving in the Valle Reatina at Poggio Bustone. This is an area of undisturbed beauty with tree-covered hills and high mountains surrounding the valley. St. Francis called it the Valle Santa (Holy Valley).

Poggio Bustone. This high-altitude village is a cluster of old buildings on a ridge. You arrive appropriately on Via Francescana and enter under the Gothic gateway where St. Francis arrived in town, proclaiming "Buongiorno, buona gente" (good morning, good people). The gate was renamed Porta del Buongiorno, and every year on October 4 a drummer goes through the village knocking on every door with that greeting in commemoration. Visit the monastery where St. Francis stayed. There are seven chapel along a wooded pathway for prayer or remembrance. Poggio Bustone was also a hideout for the resistance movement during WWII. The Sanctuary of San Giacomo was formerly an Abbey of Farfa later donated to the Franciscan order.

La Foresta. An isolated spot with a small monastery, Francis retreated here to be alone. Once when pilgrims followed him and he conducted a Mass in the monastery's courtyard, the tiny community's vineyard was nearly destroyed, trampled by the fervent followers. To make amends, St. Francis promised the monks that they would receive an abundant harvest, he prayed for such, and from a small grouping of grapes they were able to make enough wine for the year. It was here in the solitude of the mountains that St. Francis wrote the Canticle of the Creatures.

Fonte Colombo. A place that St. Francis considered sacred, he supposedly told his followers, "We must remove our sandals for this is truly holy ground". Called the "Franciscan Sinai" it was here that St. Francis received divine inspiration to write The Rule of the order, to live in obedience to Jesus, in harmony with nature, and in generosity towards others. A rustic chapel in a mountain cave, the Cappella della Madonna, is where St. Francis lived and prayed. His Tau symbol is clearly visible.

Greccio. Perched on the rocks like an eagle's nest, the hermitage of Greccio is a beautiful blend of architecture and nature. It was here in a natural cavity in the hills that St. Francis gave one of his most poetic symbols to the world - the nativity. He assembled animals and players together as a living picture to the people as he celebrated Christmas Mass and recounted the birth and poverty of the Lord. The nativity continues as a testimony of his vision and simplicity. Each year the nativity scene is re-enacted in the the rustic chapel in the rock. The town of Greccio and the Franciscan monastery were included as a UNESCO World Heritage Site along with Assisi.

Contigliano. While not on the Franciscan walk of pilgrimage places, the intriguing town is located between Greccio and Colombo and has a meticulously maintained medieval center on the top of the ridge. It's worth a visit while you're in the area.

The St. Francis Way website (Via di Francesco) has maps, details of the sights, and information on tourism services, including lodgings and restaurants.

Haven't visited yet? Have questions about Sanctuaries of Saint Francis? Ask them here!