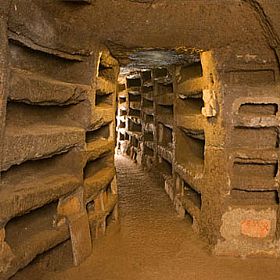 The underground burial chambers known as catacombs are swathed in both history and legend. There are miles of tunnels carved out of the tufa stone, up to four stories deep, that served as Christian and Jewish cemeteries for centuries.

The catacombs were located outside the city walls by Roman law. They were established in the first and second centuries as an answer to overcrowding and the expanse of land for burials. In contrast, pagan Roman rites involved cremation, while Christian and Jewish religions preferred burial. The catacombs were mostly clustered along the famous Roman roads that led out of the city, such as the Via Ostiense, Via Tiburtina, Via Nomentana, and Via Appia (known in English as the Appian Way). The tombs later drew faithful followers to commemorate the martyrs who were buried there. St. Sebastian, St. Agnes, and St. Calixtus are a few.

The passageways were carved out with burial niches hewn into the rock walls, where the bodies were placed and then sealed with a slab. Inscriptions bearing the name and dates of the deceased; decorations or dedications about that person were sometimes included. It is said that devout Christians descended into the catacombs to celebrate the eucharist in private and to hide during periods of extreme persecution, but whether that is legend or fact is always debated.

After Christianity became a recognized religious in 380, the practice of using the catacombs declined, as churches emerged and installed their own parish cemeteries. There are dozens of catacombs originally; today only a handful are visitable.

The oldest in the city, there are 15 kilometers of caves where some of the niches still contain bones. Entrance is through an underground basilica, worth seeing in its own right. An astoundingly preserved 2nd century fresco of the Last Supper is painted on one of the walls of the catacomb. Via delle Sette Chiese 280. Open Wednesday through Monday from 8:30 AM til 12:00 PM and from 2:30 PM til 5:00 PM.

Located along the Via Appia, it is the largest and considered the most important as dozens of martyrs and 16 popes were laid to rest here. It became the official cemetery of the Church of Rome. There are lovely gardens above, before descending into the subterranean chambers. Via Appia Antica 110. Open Thursday through Tuesday from 8:30 AM til 12:00 PM and from 2:30 PM til 5:30 PM.

One of the most easily accessible, it's also one of the most crowded of the catacomb structures. It has a crypt with the remains of St. Sebastian, arcades, and impressive mosaics, along with a bust of the saint attributed to Bernini. There is also a room that was used in ancient times for funerary banquets. Via Appia 136. Open Monday through Saturday from 9:00 AM til 12:00 and from 2:30 PM til 5:30 PM.

Below the church of Sant'Agnese Fuori la Mura, this large network of narrow passageways may have been started by Santa Costanza, the sister of Emperor Constantine. A church dedicated to St. Constanza predates and stands next to that of St. Agnes. There are interesting inscriptions and a well-guided tour at these lesser-known catacombs. Via Nomentana 349. Open Tuesday through Sunday from 8:30 AM til 12:00 PM and from 2:30 PM til 5:00 PM.

Located below the gardens of Villa Torlonia, these second and third century burial chambers contain fabulous frescoes and religious symbols important to the Jewish faith. Open only by appointment. See this website for details on scheduling a visit.

Haven't visited yet? Have questions about Rome's Catacombs? Ask them here!