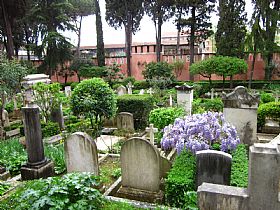 A green park with stately cypress trees, flowers, and an eclectic collection of graves and monuments, the Protestant Cemetery of Rome is a unique sight. Also known as the non-Catholic cemetery, it holds the remains and memorials of many mostly-foreign artists and authors, dignitaries and diplomats who died in the Eternal City. It is located just outside the Aurelian Wall, in the shadow of the unusual Pyramid of Cestius.

The mortal remains of the poets John Keats and Percy Bysshe Shelley, who penned immortal words, are laid to rest here, among loads of other important persons. The monument called the Angel of Grief is an especially popular and touching one, done by William Wetmore Story, an American sculptor, as a tribute to his wife.

Haven't visited yet? Have questions about Protestant Cemetery of Rome? Ask them here!