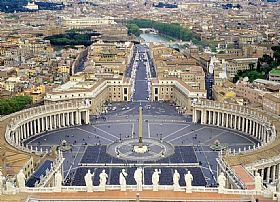 Piazza San Pietro is the square that lies in front of Saint Peter's Basilica in Rome.

Piazza San Pietro was built between 1656 and 1667 by Gian Lorenzo Bernini for want of Alessandro VII Chigi.

This may be considered one of the best examples of Bernini pieces of art and expression of the Roman Renaissance; Bernini created a unique sort of trapeze shape square, surrounded by two half circle arms of columns, as to draft an ideal oval of 240 meters long.

In the middle of Piazza San Pietro stands out the Vatican obelisk brought to Roma by Emperor Caligola, in order to decorate the Circus of Nero where San Pietro was killed; anciently on the right of the current Basilica.

It was Sisto IV who wanted to move the obelisk from its original place to the new one. The transportation took quite a long while, about four months, involving hundreds of men and several machines under the control of Domenico Fontana, who was appointed for the task.

The lateral set of columns - the two "welcoming arms" representing an ideal greeting for the entire humanity coming here in San Pietro, the centre of Christianity, are made of 284 columns and surrounded by 140 statues.

The apostolic palace, the Pope residence, overbear the right "arm" of the colonnade and the firs two windows of the top floor correspond with the private apartment; from the central window, the studio one, every Sunday the Pope bless the crowd gathering in the Piazza underneath.

On the right side of the Basilica you can see the roof and part of the Cappella Sistina, where the Conclave takes place, and where, only during the election of a new Pople the chimney for the famous smoke signal is placed.

Haven't visited yet? Have questions about Piazza San Pietro? Ask them here!