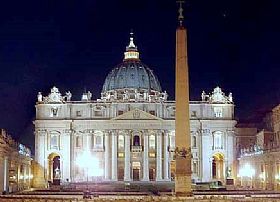 The most important church in Christendom, Saint Peter's Basilica is one of Rome's great landmarks. The first church on this site was erected by Emperor Constantine in the 4th century AD to mark the burial spot of St. Peter, the beloved apostle who was crucified nearby in 64 AD under Caesar Nero. Peter was considered to be the first bishop of Rome and therefore the first pope. It is known that the apostle came to Rome from Jerusalem and was executed here; he asked that he be crucified upside down as he was not worthy to be crucified in the same manner as Jesus.

The basilica was rebuilt in the 1500s, and the church you see today is a collaborative effort among some of Rome's most prestigious architects and designers: Rossellino, Bramante, Raphael, Michelangelo and Maderno all played important and decisive roles successively. St. Peter's Basilica was officially consecrated in 1626. The defining distinction is the dome which dominates Rome's skyline. The massive cupola was conceived by Bramante and tweaked by Michelangelo. It is 448 feet (136 meters) high, the tallest in the world. It soars skyward as a symbol of the Church. Genius in the design has the dome lined with windows, from which light billows in as direct rays, casting an ethereal effect on the interior. If you have good stamina and aren't claustrophobic, you can climb the 537 steps that are within the dome's shell to the top, where the views of the Eternal City are breathtaking.

In the center of the entrance hall are the Holy Doors, which are only opened on Jubilee years (every 25 years). Inside, St. Peter's is the largest Christian church in the world. It is enormous, and the lofty space feels open even when there are thousands of visitors. The effect is striking. The interior is festooned with gilding, marble, mosaics, sculptures and paintings - everything meant to impress and inspire. There are beautiful masterpieces, like Michelangelo's Pieta', completed when the sculptor was only 25 years old, and the only sculpture he ever signed; the equestrian statue of Constantine by Bernini, along with a gorgeous rendering of Truth and the Tabernacle of the Blessed Sacrament, also by Bernini. The Chapel of the Blessed Sacrament was designed by Borromini. The bronze statue of St. Peter is a pilgrim point, the toe of the saint is shiny-smooth from the millions of faithful who reverently touch it when they enter the church.

The piazza in front of the basilica is as famous as the church itself. Designed by Bernini, the flanking curved colonnades represent the welcoming arms of the Church. The mammoth St. Peter's Square is the site of papal audiences and other events throughout the year. The Egyptian obelisk in the center once stood in the Circus of Nero, where St. Peter was crucified, and was called "the silent witness" of the saint's martyrdom. Legend holds that it was carried here by hand, in silence. The obelisk is flanked on both sides by fountains. The Pope gives a blessing from his window above the piazza.

Tomb and Excavations: The tomb of Peter lies below the altar; tours to see the crypts can be scheduled through the Vatican's Excavations Office. To read more about the Scavi Tour and learn how to schedule a tour, see this helpful article.

The Dome: The cupola is open from 8:00 am to 6:00 pm. The elevator to the room level is accessed to the right of the basilica. From the roof, there are 320 steps to the top of the dome. Those who don't want to climb can still enjoy views and a coffee at the roof level.

Papal Audience: The Pope offers a prayer, a message and a blessing every Wednesday morning that he is in Rome. While it is free, tickets are required to enter St. Peter's Square for the audience. You can request tickets through this link. The Pope also appears and offers the Angelus and a blessing every Sunday at 12:00 noon when he is in Rome. Tickets are not required for the Sunday blessings.

Dress Code: A dress code of respect for the holy place is requested and enforced. No bare shoulders, no shorts, and no miniskirts are allowed. You'll be turned away, so dress accordingly on the day you plan to visit.

Hours: The Basilica is open from 7:00 am until 7:00 pm daily. See this link for information on Mass times, Papal Mass tickets, or getting married in St. Peter's.

Haven't visited yet? Have questions about Saint Peter's Basilica? Ask them here!