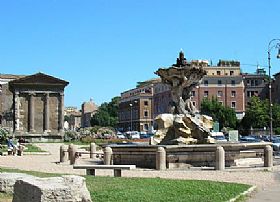 The Piazza Bocca della Verita' is a veritable open museum in the heart of Rome. Located along the Tiber where it bends with the island, this was a ceremonial and commercial zone for two ancient civilizations, and continues to draw people to its historic monuments. It was the locale of the ancient Forum Boarium.

This one piazza has two temples and two important churches, plus other historic and architecturally interesting sights. The Temple of Hercules is a round temple of Greek design encircled by a colonnade of 20 Corinthian columns. Dating to the 2nd century BC, it is the oldest surviving marble monument in Rome. It was mentioned in the Aeneid. The Temple of Portunus is a classic rectangular temple with Ionic order columns and pediment on a raised foundation. It overlooked the ancient Port Tiberinus and was built in classical Roman style.

The church of Santa Maria in Cosmedin is an ancient church with incredible mosaic flooring built over an earlier temple. It has become more famous for a decoration under its portal, though, after it was featured in Roman Holiday. The Mouth of Truth draws tens of thousands of visitors who put their hands in open mouth of the stone face as a lie-detector test! The church of San Giorgio al Velabro was built in 570 and has porticoes and a Romanesque bell tower. Attached is the Arco dei Argentari, an elaborately decorated doorway that is part of the side portico. At the river is ruined ancient bridge, appropriately called Ponte Rotto. Just south of the Piazza is the Circus Maximus.

Haven't visited yet? Have questions about Piazza Bocca della Verita'? Ask them here!