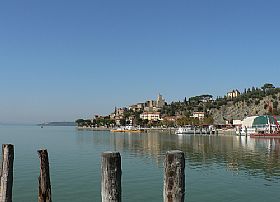 On the northern rim of Lake Trasimeno, where the water meets the rock, sits Passignano, a town with an interesting combination of nature and history, art and folklore. A unique architectural backdrop frames this lakeside landscape.

The castle has played an important defensive role for millennia. With Roman origins, it was rebuilt in the 5th and 6th centuries by the Longobards. Protective walls were subsequently added. The castle and its dependent buildings were enlarged in phases until it reached the shore. The Rocca and tall tower are still an inspiring sight on the low hill.

The historic town preserves several chapels, including the quaint Pieve di San Cristoforo, built in 1000 AD over the remains of an ancient temple. It has well-kept fresco fragments. Just outside town is the Sanctuary of the Madonna dell'Oliveto, a pilgrimage church dating to 1582 with works by Ascanio da Cortona, while the nearby village of Castel Rigone is considered the Renaissance gem of Umbria.

Water sports are naturally popular here, but there is also tennis and horseback riding available. Ferries take you to Isola Maggiore and other lakeside towns. Passignano is a nice place to enjoy a waterfront dinner as there are some good restaurants by the boat marina and throughout the historic center.

The big event in town is the annual Palio delle Barche, a battle of boating ability that re-enacts an epic battle between feuding nobles. There are rowing contests, boating activities, and flag-throwing competitions along with the pomp and ceremonies, and parties and concerts.

Haven't visited yet? Have questions about Passignano sul Trasimeno? Ask them here! 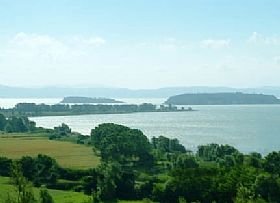 What looks like an ordinary lakeside town was actually the scene of one of history's epic battles. 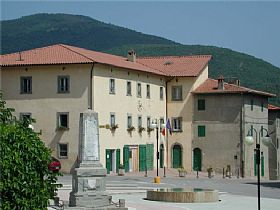 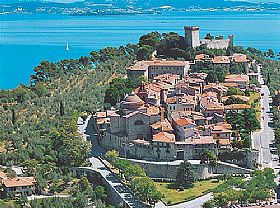 Castiglione del Lago is an incomparably delightful village located on a chalky promontory overlooking Lake Trasimeno with all the impressiveness of its castle, “Rocca del Leone”.