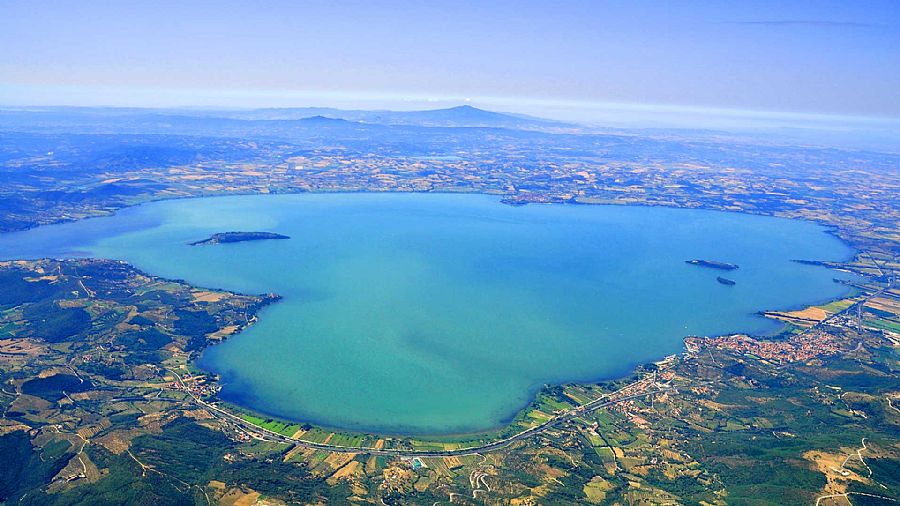 Umbria is the green heart of Italy, the central point of the peninsula; but while it lacks a seacoast, it has a fresh water lake to make up for it. The 128-kilometer body of water is near the Tuscan border, amid sunflower fields, silvery olive groves, and woods. It's rimmed with hamlets and dotted with a trio of island, while castle ramparts still stand guard over the territory.

The lake area has been inhabited since the Etruscans settled here a few millennia ago. The Romans arrived and with their empire established dominion, built roads and resorts and outposts. They experienced the greatest upset in military history with the largest ambush when they grossly underestimated the tactical brilliance of Hannibal and his Carthaginian army, who employed strategic planning to trap the forces of the great Roman Empire and drive them into the lake. In the end, 15,000 Roman soldiers perished (to about 1,500 Carthaginians), a turning point in the Second Punic War. It is said that the lake water was red for three days after the battle.

But all is calm and blissful on Lake Trasimeno today, a distant reminder of any past strife comes only through the history books and the fortresses that were built as protection in the Middle Ages. Boats are moored at the shore, sails gleam on the water, and festivals enliven the towns all summer long.

Towns like Tuoro sul Trasimeno, Castiglione del Lago, and Passignano sul Trasimeno offer placid days and good food along the shoreline or in the cobbled lanes, with views of the lake. The entire lake is a designated regional park, the largest in Umbria, with perch and pike, migaratory birds, ducks and cormants, and plant species.

But what is there to do? Well, boating, fishing, swimming for starters. Other water sports, such as windsurfing and SUP are popular, but so is bird watching. Or hop a ferry to Isola Maggiore, the island has a village that is still inhabited by about 50 year-round residents. It's a great place for lunch and a stroll and the novelty of taking a ferry in Umbria! Smaller Isola Minore and larger Isola Polvese are uninhabited though some buildings remain.

There are walking and cycling paths throughout the area and rimming the lake; you can find maps and descriptions on the park's website or at visitor's centers in the towns on the lake. There's a museum dedicated to Hannibal's victory at Tuoro sul Trasimeno, and a unique sculpture garden, the Campo del Sole (field of the sun). Special events are organized from spring through autumn, including the Trasimeno Music Festival, Trasimeno Blues, and literary events, but don't rule out the plethora of food events (this is Italy, after all!). Want more excitement? There is horse riding and MTBs to get out and see the land. Want to hit the links? The Lamborghini Golf Club is here, one of Italy's most prestigious.

Wineries dot the hills around the lake, so you can visit and sample the local vintages. Castles beckon to be visited and photographed, stolid fortresses that still watch over Umbria. (We recommend the Knights of Malta castle in Magione to visit.) An unusual site is the leaning tower of Vernazzano, practically unknown compared to the decorative Pisa tower, but a tilted spectacle, nonetheless.

Or just walk along the shore, listen to the lapping of the water, and enjoy the peaceful place that has witnessed millennia of history on its shore.

Haven't visited yet? Have questions about Lake Trasimeno? Ask them here!

Have a look at our holiday homes in Umbria.