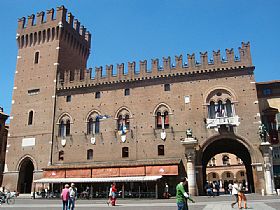 One of the symbols of Ferrara is the bulwark building known as Palazzo Municipale. It was built in 1245 with a very different facade, constructed as a ducal residence for the powerful Este family. They lived in the palazzo until the end of the 16th century, when they built the massive Castello Estense down the street, and the ducal palace became a municipal building. The facade was radically changed to a historic-inspired Gothic facing in the 1920s, with the addition of the crenellations and the tower, Torre della Vittoria (Tower of Victory).

The Este family owned an impressive block of buildings, with the grand arched entrance, the Volto del Cavallo, flanked by equestrian statues of family heroes. Inside, the enclosed courtyard called the Cortile Ducale (now the Piazza Municipio) was the scene of plays and parties by the Este dukes and duchesses. Here you'll find the covered Scalone d'Onore and the Cappella di Corte, what was the family's private chapel, now used for meetings and shows. In the courtyard is the Palazzo di Corte.

The interior of the building holds richly decorated rooms, like the frescoed Arengo room, the Lapidi room with its crests and coats of arms, and opulent wood-inlayed Duchess Room. Running along the Piazza Savonarola side is the Loggia dei Camerini, while connecting the Palazzo to the Castello Estense is the covered arched walkway known as Via Coperta ('covered way'). Across the street is the fancifully designed cathedral.

Haven't visited yet? Have questions about Palazzo Municipale di Ferrara? Ask them here!