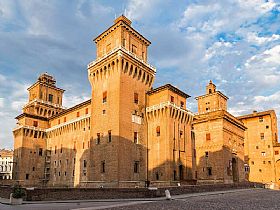 Set in the heart of Ferrara, the Castello Estense is the symbol of the city. The heavy bulwark structure was built in the 1300s as a defensive fortress, complete with a moat and drawbridges. There are four towers that provided advantageous look-out points. The central courtyard has a water well, and down below in the lower depths are the dungeons- all the signs of a true castle!

The structure was converted into a noble residence by the Este dynasty, with elegant decorative touches added to adorn it in style. The battlements were replaced by balconies, and roof terraces were added. Frescoes were splashed everywhere, in the courtyard, the salons and the chapel. The Chamber of Dawn in the Torre dei Leoni boasts paintings that represent the four parts of the day, with Dawn being a winged goddess. The Game Room has a frescoed barrel vault ceiling. The Hall of Honor is outlined with crests (coats of honor) while the Hall of Bacchanalia is a painted corridor depicting scenes of Bacchus.

The castle hosts rotating art exhibits and occasional theatrical shows. Take the tour to see the grand salons, the Ducal Chapel, the kitchens, and the dungeons. Then climb the 122 steps to the top of the tower, known as the Torre dei Leoni, for a great view.

Haven't visited yet? Have questions about Castello Estense? Ask them here!

Have a look at our vacation villas in Ferrara.