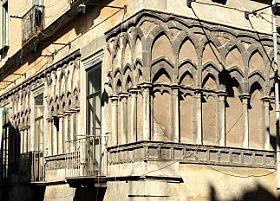 Palazzo Fruscione is in the historic center of Salerno, near the ancient Via dei Canali, along the narrow lanes of the old city. It was partially constructed over the ruins of an ancient Roman thermal bath complex, and some tufa arches and columns can still be seen at the foundation level. The palace is named for the last family that possessed it, the Fruscione, who gave it up to public purposes in the 1960s, but it dates back to the Longobardo (Lombards) era. The amazing facade bears gothic-like pointed arches with vaulting and ordered tiny balconies.

There are traces of Medieval-era paintings on portions of the exterior walls. The palace is abutted by the bell tower of the Church of San Pietro a Corte, which was once a private royal Lombard chapel. An arch and defensive wall also date to that era.

While the palace suffered years of neglect, funds have devoted for its restoration.

Haven't visited yet? Have questions about Palazzo Fruscione? Ask them here!

Rent a holiday house in Salerno and travel like a local.