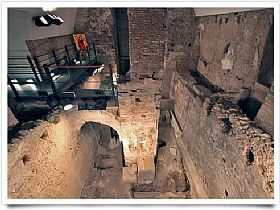 An unremarkable facade and doorway in Salerno's historic center hides an archeological wonderland. Stretching out below the streets of the city are the remains of ancient buildings dating back to the first century BC. The underground passages and rooms preserve the historic testimony of an extensive Roman bath complex, along with a Paleo-Christian church and cemetery, and a 3rd century oratory building.

The Roman baths are thought to have been constructed by Emperor Trajan. Later turned into a burial grounds, the Longobard Prince Arecchi II built a chapel dedicated to Saints Peter and Paul over top. Managed by the Salerno Archeological Association, the fascinating complex is well worth a visit while you're in Salerno. Visits are free; it is open on Monday from 3:00 pm until 6:00 pm, and Tuesdays through Sundays from 10:00 am until 1:00 pm.

Haven't visited yet? Have questions about San Pietro a Corte? Ask them here!

Enjoy the comfort of a vacation home in Salerno.