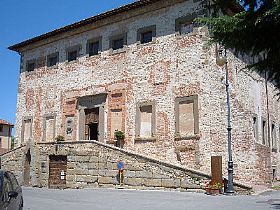 The 16th-century Palazzo della Corgna, also known as Palazzo Ducale, in Castiglione del Lago is a gorgeous imposing building, built on the remains of the ancient Palazzo Baglioni. It was constructed in 1550, on orders by the governor of the town, Ascanio della Corgna.

The Palazzo is set over four floors: the basement with the kitchens, a ground floor, a piano nobile (the noble residence), and a mezzanine (used by the servants).

Inside you can visit the numerous rooms, all incredibly frescoed.

The frescos have been attributed to:

You will pay a small fee to visit the Palazzo, but it will be valid for both Palazzo and Rocca del Leone, as well as other sites of the monumental circuit.

Haven't visited yet? Have questions about Palazzo della Corgna? Ask them here!