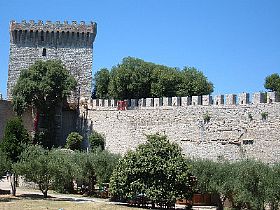 The majestic building formed by poligonal battlemented walls, four towers and a triangular donjon has been the most important military settlement on the shore of Lake Trasimeno, for ages.

Known as Castello del Leone, from which it derives the name of the town - Castillonem, Castiglione - the Rocca was an out-and-out fortress, built in 1247 for want of Frederick II, to be part of the huge defensive system that started from Apulia to cross all over Italy.

The entire pre-exhisting village was destroyed and rebuilt in conformity with these new parameters. In 1250, Rocca del Leone was indeed one of the most solid military constructions in Central Italy.

Haven't visited yet? Have questions about Rocca del Leone? Ask them here!

Rent a holiday house in Castiglione del Lago and travel like a local.