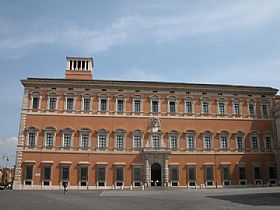 Many people don't realize that the official church of the pope isn't Saint Peter's but the older basilica known as Saint John Lateran. It is the Cathedral of Rome, and thus the home church for the Bishop of Rome, the Pope. Next door is the Palazzo del Laterano, which was a papal palace for centuries. The history of the palazzo goes back to ancient times when it was the seat of the Laterani, who were Roman administrators. Constantine acquired the building, then known as Domus Fausta, the home of his second wife. He commissioned the building of the adjacent basilica and eventually gave the palace to the Bishop of Rome. St. John Lateran is the oldest basilica in Rome, though it was completely redone in the 1600s.

The palazzo, meanwhile was enlarged and fortified in the Middle Ages and served as the papal residence until the papacy was taken off to Avignon in 1309. When it returned to Rome it established its headquarters at the Vatican though the palace was still used by popes as a retreat and housing for dignitaries. The Palazzo del Laterano is still of great importance to faithful pilgrims because it houses the Scala Santa, the holy staircase brought by Constantine's mother, and placed in a sanctuary apart from the palace. It is said to be the staircase that was in Pilate's palace in Jerusalem, which Christ climbed to receive his condemning judgement. The 28 steps are climbed by the faithful on their knees. Inside the palace is the private papal chapel, as well.

There is the Vatican Historical Museum in the building, too. It chronicles the long, storied and sometimes turbulent history of the Vatican, and includes displays of the once-powerful Papal Military Corps, portraits of the popes, and various memorabilia. The more interesting part is the Carriage Pavilion, which displays the array of Pope-mobiles - carriages, wagons and cars used by the popes through the centuries.

Haven't visited yet? Have questions about Palazzo del Laterano? Ask them here!