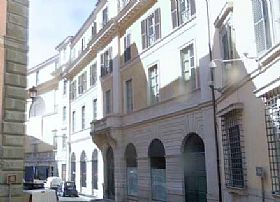 An overlooked museum right in the heart of Rome is hidden in plain sight. In fact, it's housed in one of the city's most beloved monuments - the Trevi Fountain! Well, behind it in the palazzo that the fountain is attached to. The National Institute of Graphics is located in Palazzo Poli, built in 1836 by Giuseppe Valadier, a premier architect of Rome at the time.

The street is Via della Stamperia, the "printing press", and the palace was originally called that, too, reflecting the origins as the official printing and engraving headquarters for the pope. It was instituted in 1738 by Clement XII. The palace was later restored and redone.

Inside, you'll find a free museum that few venture into, with masters and templates, engravings, carvings, etchings, photos and designs by a variety of artists and craftsmen, including a drawing by Da Vinci and one by Mantegna, among the many treasures.

The museum of graphics (Istituto Nazionale di Grafica) is open from 9:00 AM til 1:00 PM. Closed Mondays.

Haven't visited yet? Have questions about Palazzo Calcografia and Engraving Museum? Ask them here!