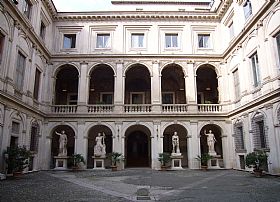 A noble palace-turned-museum, the Palazzo Altemps is now a branch of the National Roman Museum and is filled with priceless Classical sculptures. Built for Girolamo Riario, the nephew of Pope Sixtus IV in the late-1480s, it passed to Cardinal Marco Sittico Altemps, who had it renovated in full Renaissance style.

The delightfully-styled palace is just a few steps from Piazza Navona. It was built over the remains of a Roman domus. The Cardinal Altemps added the altana, rooftop tower-like loggias, and the delightful inner courtyard, decked out with decorative arcades and loggias. Emblems of the Altemps and Orsini families are found among the sculptures and reliefs. A fascinating fountain is embedded with glass mosaics. The palazzo was the scene of many ceremonies and noble events, which made it popular with intellectuals, as well.

Statuary is found everywhere; the Altemps family were dedicated collectors. When the palace passed to the State, they acquired and added the prestigious Ludovisi-Boncompagni collection, making this one of the most important galleries of Classical sculpture in the world.

Haven't visited yet? Have questions about Palazzo Altemps and Museo Nazionale Romano? Ask them here!