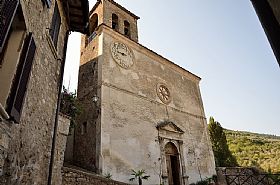 If art and culture are wearing thin, or the kids are craving something different, then the Mummy Museum in Umbria will do nicely. This strange array of long-dead folks draws the macabre-seeking and the curious. It is located in the hamlet of Ferentillo, in southern Umbria's hills near Terni and Spoleto, where looming peaks rise over the town. The church of Santo Stefano was rebuilt in the 15th century right over top the previous church, so rather than waste that space, they used the old one as a basement, which eventually became a burial ground. Turns out that this church-turned-crypt had unique air, soil and mineral conditions that resulted in the natural mummification of the bodies interred there.

The tour takes you through to see the residents and recount their stories. There is the lawyer who was killed along with his murdere, a mother and baby, a man killed by a swinging church bell, with evidence of the blow, a Chinese couple on pilgrimage who were struck down by the plague, along with a pair of birds and other people who had died through the centuries in this mountain village. These aren't opulently lavish mummies like the Egyptian ones, but ordinary folks. The mummification kept their teeth, beards, and even clothing intact. A little spooky, for sure! But it is also fascinating and the guides narrate the stories to keep things interesting.

Haven't visited yet? Have questions about Museum of Mummies? Ask them here!