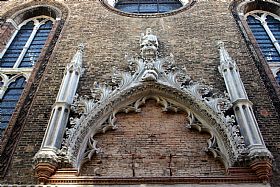 Sitting on the airy Campo di Santo Stefano, the church of the same name takes you by surprise. The square was once home to bullfights but is now a popular hang-out spot with plenty of cafes and restaurants around it, a spot that feels more "Venetian" than the busier bustling tourist-crowded piazzas. But take a few moments to duck inside the church, which has a past as bloody as the bullfights that once took place outside. Apparently, the church had to be re-consecrated five different times because of violent acts within its walls.

The church was started in 1294 by Augustinian monks and completed in 1325, complete with cloister and monastery next door. The towering bell tower was added later and now leans dramatically, the tallest of Venice's many inclined towers. The door of this Gothic-style church greets you with a plain facade dressed up by ornate white marble carved decorations. Then you walk inside and, instead of the usual vaulted and domed interior you might expect, are greeted by an upturned ship! The roof is a ship's keel, built in Venice's Arsenale, the shipyards responsible for the Republic of Venice's maritime domination during its glory years. The effect of this roofline is surprising, decorated with gilding and engraving.

Columns lining the nave alternate red and white marble with painted arches spanning the divide between them. You'll find a trio of Tintorettos, the great master of Venetian Renassiance art, and a handful of excellent sculptures, including the enchanting tomb of Canova in the cloister. The quiet cloister is open only on weekday mornings. The monastery building now houses the Finance ministery offices.

Enjoy the church then stand in the square to see how the tower looks like it will crumble. Then take a seat at one of the sidewalk cafes to soak in the timeless atmosphere and sense of history in this corner of Venice.

Haven't visited yet? Have questions about Church of Santo Stefano? Ask them here!

Enjoy the comfort of a home rental in Venice and Veneto.