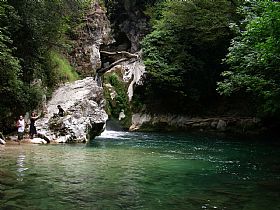 Near Jenne in Lazio close to the Abruzzo border lies a couple of natural wonders that attract cave enthusiasts and nature lovers. The Grotte dell'Inferniglio is a complex cavern that descends into the depths of the earth along the Aniene River. Pass an old water mill and you'll find a couple of kilometers of subterranean bizarreness, where strange stalagmite and stalactites mingle with other weird sculptures of nature's making, formations that look "melted." This odd ambiance led the first explorers to give it the name, saying it resembled descriptions of Dante's Inferno. The spot is popular with speleunkers.

Another nearby attraction is the Casata di Trevi. Following a path along the Aniene River, you'll go through a lush green forest passing crumbling ruins and romantic ancient bridges now overgrown by foliage to arrive at the cooling oasis of the waterfall, where the river plunges over a low cliff and forms a pool in the midst of the secluded woods.

Haven't visited yet? Have questions about Grotte dell'Inferniglio? Ask them here!