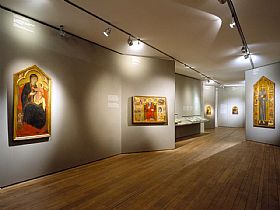 A priceless collection of masterpieces accumulated by the noble Farnese family is housed in the monumental Palazzo della Pilotta in Parma. The elite family transferred it here when Bourbon duke Philip, was rule of the Duchy of Parma. The palazzo is more like a castle, built of stone and imposing, surrounded by a park. The Palazzo della Pilotta also holds the charming Teatro Farnese, a theater built to entertain the Farnese Court; besides the National Gallery there is an archeology museum and a notable scholastic library here, too.

The Galleria Nazionale displays impressive paintings by masters such as Leonardo da Vinci, Correggio, Canaletto, Parmigianino, Carracci, Fra Angelico and Guercino, along with regional artists who produced beautiful works. The Palazzo is located a few blocks from the Cathedral and across from the Parco Ducale.

Haven't visited yet? Have questions about Galleria Nazionale of Parma? Ask them here!

Rent a holiday house in Emilia Romagna and travel like a local.