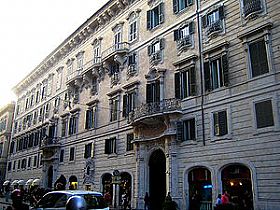 Despite its position in the heart of Rome, the Galleria Doria Pamphilj is an overlooked art museum that happens to house many treasures. Its right on the well-beaten path of Via del Corso, one of Rome's illustrious shopping streets. And it's a real-deal palace that is the largest privately-owned palazzo in Rome. And if that weren't enough, it's still held by a prince, a genuine Doria Pampilj descendent of the illustrious family for whom the gallery is named. Yet despite these draws, it gets passed by without a glance by many on their way to the Forum (or the Spanish Steps).

The building started life as the Palazzo Aldobrandini in the 1400s, but through nobility, politics and unions among the great noble families it became the possession and namesake of the illustrious Doria Pamphilj. The first of them to take possession - Camillo Pamphilj (who married Olimpia Aldobrandini) expanded and redecorated the palazzo and then started adorning it with art collections. His children, grandchildren and subsequent generations continued the tradition until today the palace is a crammed full of more than 400 works of art.

While it has a rather unassuming facade, the interior is like you'd expect in a palace: there is a grand hall, spacious salons and frescoed ceilings. There is a green and peaceful cloister garden in the interior courtyard. Throughout the rooms and halls are countless masterpieces and lesser known paintings gracing the walls, among them the likes of Caravaggio, Correggio, Titian, Raphael, and Carracci. Bernini, Filippo Lippi and Vasari are represented, too. In fact, it's one of the most important private art collections in the world. Yet some days the salons are strangely vacant, with just a handful of visitors in each, making it more enjoyable for those who do enter.

The admission price includes a free audio guide; the English version is excellent as it is narrated by the prince himself, Prince Jonathan Doria Pamphilj, who includes personal and witty anecdotes about the home and the collection. There is an elegant cafe/tea room for relaxing in historic surroundings after wandering the gallery (it is also open to the public on the via della Gatta side of the palace). Every Saturday morning features live Baroque music and a staff guided tour.

Haven't visited yet? Have questions about Galleria Doria Pamphilj? Ask them here!