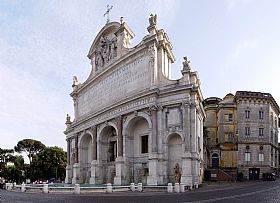 The monumental fountain formally known as the Fontana dell'Acqua Paola is referred by more casually by locals as the fontanone, "the big fountain." Located on the Janiculum Hill, the fancy watering hole boasts a baroque background of marble finery. It is fronted by six columns - two in grey granite and four in red granite, and five arches. All the materials used for construction were scavenged from ancient ruins, as was the custom of the time. Commissioned by Pope Paul V Borghese, it was part of a public works project to repair the ancient Traiano Aqueduct that was built in 107 BC. It once traversed 47 kilometers from Lake Bracciano to bring water to Trastevere and Pope Paul V renewed its course and its glory, marking it with this monument, that resembles an ancient Roman triumphal arch.

The commission was given to the aptly-named architect, Carlo Fontana. The facade is decorated with angels and dragons. Water overflows from three bowls into a wide semi-circular basin below. The perimeter was later balustraded off to keep horses from being watered there.

The Fontana dell'Acqua Paola sits on a high point on the Janiculum Hill and offers splendid vistas of the city and its domes. It's considered one of the most romantic spots in Rome.

Haven't visited yet? Have questions about Fontana Dell'Acqua Paola? Ask them here!