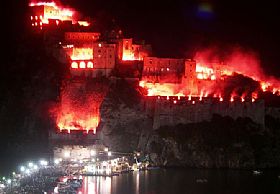 A unique and elaborate waterside festival takes place every year on the island of Ischia. The festa of Sant'Anna starts off solemnly enough with an effigy of Saint Anna, the mother of the Madonna and the patron saint for the festival. The procession includes pregnant women and those who want to become pregnant. Then the area's fishermen have a spiritual parade of boats and a recitation of the rosary in front of the little church, known as the chiesetta, to honor the day. Traditionally they would have dinner onboard their boats and strap flasks of wine off the sides submerged in the water to keep them cool, their boats bedecked with garlands of flowers.

There is an elaborate parade of hundreds of boats decorated with flowers that move around the bay in a haze of shadow and light. But the main event is the Palio di Sant'Anna, with the island's six towns plus Capri and Procida participating for a prize by constructing artistic displays on huge floating platforms, depicting allegorical, humorous or historical happenings. It is all played out on the bay, the Baia di Cartaromana, with a crowdn on the pier and along the reefs, in the shadow of the castle. There is a sense of mystery and adventure to the whole party and a prize is given to the "gozzo piu' bello" -the most beautiful float.

The festa culminates in a dramatic event - the 'burning' of the castle. Red fireworks create an illusion of destruction as they re-enact the sacking and burning of the castle wrought by the Saracens centuries ago. Of course, there is plenty of laughter, food, and fun and a huge fireworks display at the end.

Haven't visited yet? Have questions about Festa of Sant'Anna? Ask them here!

Rent a holiday home in Ischia and travel like a local.