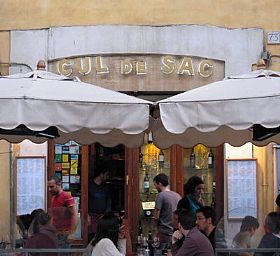 Enoteca Cul de Sac was one of Rome's first wine-bars. Opened in 1977, they've been pouring vino to locals and tourists alike, who choose from among 1,500 labels. The choice is staggering, almost overwhelming. But don't worry, they'll help you pick, if you're unsure of which wines to try.

The place gets packed, so expect a line. There are wood booths crammed in among the wine bottles, with some tables outside, too. They offer a variety of food choices - from cheese and salami to small plates, to full meals, depending on what you're after and how hungry you are.

Cul de Sac is in Piazza Pasquino, in the shadow of the "talking statue" a Hellenist sculpture that has been a mouthpiece of Roman protest for centuries - people tack up fliers and laments on it to voice their opinions.

Haven't visited yet? Have questions about Enoteca Cul de Sac? Ask them here!