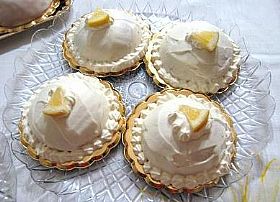 There is a marvellous place in Italy, divided between the Sorrento Peninsula and Amalfi Coast, a stunning coastal stretch where nature and art find a perfect union, giving life to enchanting landscapes. This coastal stretch is worldwide famous even for the cuisine. Specially Amalfi can boast the best lemons of the world, the richest in juice, the biggest and most scented ones!

One of the typical desserts of this area is in fact lemon based. The name says it all: delizia (delight), the youngest of a long series of desserts in Campania, whose fame has reached even Japan.

Separate the eggs putting the yolks in a large bowl and the whites in a smaller bowl. Add the sugar to the yolks, and beat until the consistency of frosting.

Beat the whites until they stand stiff. Fold the whites into the yolk-sugar mixture. Turn it over slowly and gently until completely mixed. Sift the flour (even if you don't usually sift flour - do it).

Fold the flour slowly, a bit at a time, to the egg-sugar mixture.

Butter and flour a 9" cake pan. Pour in piping bag with plain tube and make many half spheres. Bake at 160 degrees C (320 degrees F), for about 20 minutes. When done the puffs will be toasty on top, and a toothpick will come out clean.

Custard: Set all but 1/2 cup of the milk to warm over a slow burner with the vanilla bean and lemon skin. In the meantime, lightly whisk the yolks in a bowl to break them. Strain the flour into the bowl, whisking gently, and making sure that no lumps form. Whisk in the sugar too, and then the remaining half cup of milk, keeping a wary eye for lumps.

By this time the milk on the stove will be about ready to boil. Fish out and discard the vanilla bean, and slowly whisk the milk into the egg-and-milk mixture. Stick a fork into half lemon, return the cream to the pot and the pot to the fire, and continue cooking over a low flame, stirring gently with the fork, until it barely reaches a slow boil. Count to 120 while stirring constantly and it's done. Let it cool for a couple of hours, then add three parts of cream (previously whipped) and the grated skin of two lemons, then stir all together.

Empty the puffs from below and fill them up with the custard-cream mixture. Pour in a bowl roughly one litre of warm water, one shot of Strega liqueur and 1 tablespoon of sugar. Soak the puffs one by one quickly in the mixture, then place them onto a tray.

Add some milk to the remaining custard-cream mixture and cover the puffs. Use the remaining whipped cream to make little roses (using a star piping tube) on top of the puffs and add some candy cherries and julienne cut lemon skin.

Haven't visited yet? Have questions about Delizie al limone? Ask them here!