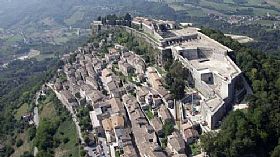 A fortress that stretches along a ridge-top with expansive views of the entire surrounding region is a highlight to any trip to Abruzzo. The fortezza of Civitella del Tronto was a strategic military installation for centuries, positioned right at the border of the Kingdom of Naples and the Papal States. It witnessed many regimes come and go but was called "la fedelissima Civitella" - the most faithful Civitella, for its unwavering service to the Kingdom of Naples. It was the last hold-out in the Risorgimento, the take-over by Garibaldi and his Piedmont troops that ended with the unification of Italy once Civitella fell.

The enormous walled fortress rests on its ridge at 600 meters above sea level and was one of the biggest and most important military engineering works in Europe. The views are incredible from here, in the shadow of Gran Sasso, with the foothills of the Apennines, the rolling hills of Abruzzo's wine country and the Adriatic Sea in the distance all in the picture. Meander around the massive structure, especially the panoramic walkway on top of the walls, to grasp how big and influential this fortezza was. You'll see parade grounds, the chapel, the soldiers' quarters, kitchen and storerooms, armaments rooms, the garrison, and stables. Cisterns and lavatories, and staterooms for officers or official meetings round it out. A museum of arms is worth a look, and there is an interesting display about a little-known piece of American history: once the troops loyal to the Bourbons were defeated, many went to the US to fight in the civil war on the side of the Confederacy. President Lincoln had even tried to pursued Garibaldi to travel to the Union and command a unit of northern forces.

But the focus here is on the centuries of Italian history and the ensuing results of the Unification (including a bit of background on the briganti who tried to stop it). And, of course, the incredible and unforgettable panoramas below azure skies and fluffy clouds.

Free guided tours are conducted every hour, or you can wander on your own. Be sure to stroll around the pretty terraced town, its houses lined up below on the ridge in rows, with intriguing lanes and tidy buildings. Toss a coin in the Fontana degli Amanti (lover's fountain), and stop at a restaurant to sample the town's handmade pasta, called ceppe.

Haven't visited yet? Have questions about Civitella del Tronto? Ask them here!