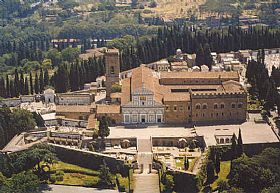 This basilica at the top of a steep staircase sits on one of the highest points in Florence and is dedicated to the city's first martyr. The Florentine Romanesque styled structure pays homage to St. Miniato, a bishop from Armenia who lived in a hermitage on this spot and was decapitated for his devotion during the Roman persecutions. A small chapel was erected, then a monastery, and the church grew. The current building dates to 1013, with some of the marble taken from Roman ruins. Other white marble is from Carrara while the green bands are from Prato. The facade has a mosaic of the saint with Christ holding a crown.

The church is a striking sight when seen from the Ponte Vecchio, standing on its hill. It has changed little since its construction, making it one of the few churches that wasn't altered in succeeding centuries and a historical gem to see. One exception is the Cappella del Crocifisso, which was done by Michelozzi in 1448. It has beautiful glazed terra cotta sculptures by Della Robbia, who also made the crucifix behind the altar. The Renaissance funerary monument in the Cappella del Cardinale del Portogallo contains the remains of a cardinal who was the Portuguese ambassador to Florence and is the only tomb in the church. There are five Della Robbia medallions here along with a painting by brothers Antonio and Piero del Pollaiolo. The marble floors were laid in 1207!

The stone bell tower was used for defense and as an artillery vantage point during the siege of Florence in 1530. The cloister is lovely and the attached monastery is still home to a monastic community of the Olivetan order. They make liqueurs, honey, herbal teas and tinctures that they sell in a gift shop.

The basilica of San Miniato al Monte is near the Piazzale Michelangelo on the hill above Florence's historic center, offering beautiful views. The cemetery in front of the church is the final resting place for many of Florence's important and influential people (including Carlo Collodi, who penned Pinocchio).

Haven't visited yet? Have questions about Church of St Miniato al Monte? Ask them here!