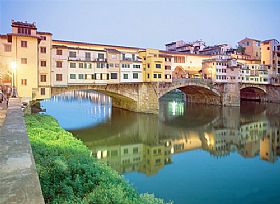 It's not called "the old bridge" for nothing! The Ponte Vecchio really is the oldest bridge in Florence, built in 1345 -and the only one that remained intact after the Second World War. The Ponte Vecchio has always been full of workshops, though it used to be tanners, blacksmiths, and butchers that occupied the spaces, and they threw out the rubbish into the river. They were evicted by order of Ferdinand I because of the noise and horrible stench.

The ancient shops were restored and rented to a more decorous lot of artisans - goldsmiths. Nowadays, the interesting shop-lined bridge is flanked by luxury shops specializing in modern and ancient jewelry.

The secret passageway known as Vasari's Corridor runs along the eastern side of the bridge, just above the shops, and is adorned by numerous marvelous self-portraits of artists like Rembrandt, Rubens and Hogarth. It was designed by Giorgio Vasari in 1565 to allow the influential Medici to move between the Pitti Palace and the Palazzo Vecchio, the hub of Florentine political life, along a private and protected passageway, safe from the crowds and bustle of the workshops below.

Haven't visited yet? Have questions about Ponte Vecchio? Ask them here!