Church of St Maria in Monserrato 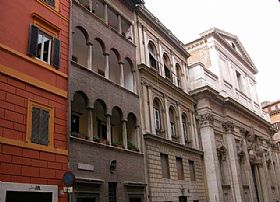 A beautiful church near Rome's Piazza Navona often gets passed by as tourists rush to the better-known sights, which is a shame as it has some lovely art and an interesting history.

The Church of Santa Maria in Monserrato isn't "just another Roman church," in fact, it isn't actually "Roman" at all! It is the national church of Spain in Rome, built and funded by the Spanish crown. In the 1300s there was a Spanish-sponsored hospital and chapel here, but in 1495 the Aragons and Catalans decided to build an actual church. It was named for the Abbey of Monserrat in Spain and dedicated to the Virgin Mary. In 1518 it was given a new architectural styling thanks to Antonio Sangallo the Younger. It was updated again in 1675 with the addition of the apse and Baroque style flourishes. The church was under the patronage of the Spanish royal family.

The barrel vault over the nave is glittery with gilding, and heightens the light and airy effect of the interior. You'll find the side chapels adorned with beautiful artwork by Spanish and Italian artists, including paintings by Caracci and a lovely scuplture by Jacopo Sansovino.

Located on Via Giulia, a street of Renaissance palazzi and antique shops, the main entrance is actually on the other side, on Via di Monserrat.

Haven't visited yet? Have questions about Church of St Maria in Monserrato? Ask them here!