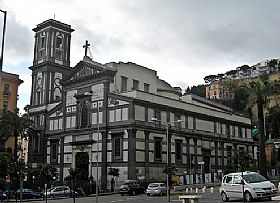 The Church of St Maria di Piedigrotta was built in 1352 by the fishermen of Mergellina. It sits on a site that was formerly occupied by an older chapel, which housed a Byzantine sculpture of the Virgin Mary, a precious icon that still stands in a prominent place in the "new" church.

The Baroque styled building has been restored and redone several times through the years. The original facade was located where the altar is now; it faced the grotto that gives the church its name (piedigrotto means "foot of the cave"). There are frescoes and paintings that date from various periods. Behind the church is the tomb of Virgil, located to the left of the Crypta Napoletana. The crypt, also known as the Grotta di Pozzuoli, was a Roman passageway built to facilitate easier travel between Naples and Pozzuoli.

Piedigrotta is the area of Naples that has most influenced the popular music tradition, so it's appropriate that they throw the biggest party of the year here. The Festa di Piedigrotta is a combination of religious and civic celebrations that includes processions, shows, exhibits, music (of course!), and a spectacular fireworks display over the bay.

Haven't visited yet? Have questions about Church of St Maria di Piedigrotta? Ask them here!