Church of St Agnese in Agone 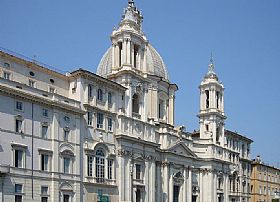 Facing Piazza Navona, the fanciful church of Sant'Agnese in Agone is a Baroque blend of masters. The powerful Pamphili family built the structure on the site of an earlier medieval church, to display their prestige. Fronting the grand piazza, it's an impressive church and unmistakable.

While there is a legend that Bernini's famous Four Rivers Fountains has a character holding up his hand to shield his eye from the "hideous sight" of the church, in part designed by Bernini rival, Borromini, it's unlikely, since Bernini himself also had a hand in its construction. Started in 1652 with architect Girolamo Rainaldi and son Carlo on the project, commissioned by Pope Innocent X of the Pamphili family, the pair was replaced a year later by Borromini, who added curves and modifications to the plans while keeping the original footprint of the church they designed. Work went slowly and, frustrated by battles for his radical visions of undulating stone, Borromini resigned in 1657. Rainaldi was brought back onto the project, then joined by Bernini, who tamed some of the exuberance of Borromini's design. The dome is a masterpiece of dimensional layers to create a broader look, one of Borromini's hallmarks. The church was finally finished and frescoes and decorations added to the interior to create the glorious sight you see today. Around the church you'll find several representations of a dove holding an olive branch, part of the Pamphili family crest.

The church sits on Piazza Navona, which during Roman times was Domitian's stadium. It was here that in the 300s Sant'Agnese, the virgin saint, was forced to expose herself before her death. The skull of the saint is housed in this church, while her body is buried at Sant'Agnese Fuori Le Mura (St. Agnese outside the walls), where she was martyred. The piazzas outline follows that of the racetrack-like stadium and remains can still be seen below ground level in several spots.

Haven't visited yet? Have questions about Church of St Agnese in Agone? Ask them here!