Church of Santa Maria in Domnica 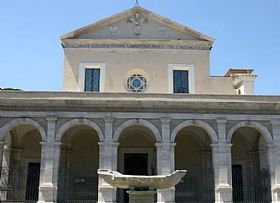 One of the highest point of Celio (the XIXth rione of Rome) houses the church of St Mary in Domnica, also known as Church of Navicella (bark) because of the lovely fountain just in front of the portico, shaped as a Roman bark: early XX century copy of a sixteenth-century finding.

According to the legend, the bark was found close by the Colosseum and it probably was a vow dedicated to the goddess Isis, Protectress of the Sailors. The vow was maybe made from some Egyptian sailors passing through Rome (that used to be the site of the so-called Castra Peregrina - barracks in transit - indeed) or the sailors of the fleet of Cape Misenum, which resided nearby the Colosseum to better handle the velarium: great awning that covered the Colosseum to give off shade and slight protection from rain.

The current oeuvre was sculpted on commission of the cardinal Giovanni de’ Medici, by Andrea Sansovino (1460-1529), who restored the church nearby between 1513 and 1514.

Turned into fountain in 1931, in occasion of the public works to enlarge the street, the Navicella has been changed: it is currently based on a low elliptical basin and located in a horizontal position as regards of the church. The white marble basin reproduces the Medicean coat of arms, while the cutwater exhibits an animal protome. The bottom of the basin is a mosaic made of river cobblestones, embellished with fish and ships decorations.

The church of St Mary was built instead in the VII century and, according to the legend, erected over the residence of a Roman matron called Ciriaca. The holy building is currently set where it was the V Coorte dei Vigiles (policemen court): multi-tasking corps responsible for the maintenance of public order and prevention of fire, founded by Augustus in the VII century BC and subdivided into seven barracks – Coorti – and seven detachments, called Excubitora.

The name Domnica derives from ‘Dominicum', one of the ancient ways to call the Christian places of cult. The building was totally rebuilt during the IX century, for want og Pope Pasquale I and restored in 1513, on commission of Pope Leo X.

The basilica plan remained the basis to built St Domnica: with its nave and two aisles, separated by imposing columns of imperial age. The mosaics dated back to the IX century.

Walking down the street towards the Colosseum Valley you will notice, on the left, the walls belonging to the magnificent temple offered by Agrippina to her husband Claudius, subsequently annexed to the Nero's Domus Aurea and re-adapted to nymphaeum.

Haven't visited yet? Have questions about Church of Santa Maria in Domnica? Ask them here!