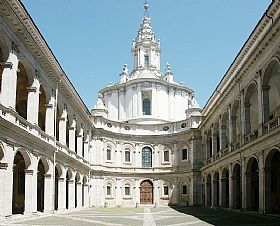 The church of Sant'Ivo alla Sapienza is an architectural gem hidden in a courtyard near the Piazza Navona. It is considered the true masterpiece and high achievement of its architect, Francesco Borromini, who used a complicated geometric plan to design the church to fit in the limited space allotted for it. It is set into the courtyard of Palazzo della Sapienza, an old university, and Borromini had to place the chapel into the open end of the already-existent buildings. The arched windows and pilasters blend seamlessly into the columned arcades of Giacomo della Porta's courtyard. It was started in 1642 and was constructed under three popes; it was finally dedicated in 1660.

Borromini designed a curving concave and convex structure that softens the geometric hexagon plan and makes it appear fluid and spacious. The interior of the small dome is a fanciful trick of perspective, appearing taller. He added a conical lantern to achieve a play of light and a sense of height. The exterior of the dome is topped by an ethereal swirling spire, giving the facade a distinctive landmark.

The gleaming white church looks light and flowing while actually being a complex work of architectural art. The altar painting was done by Pietro da Cortona. It's open very limited hours - only from 10:00 am until 12:00 pm on Sundays - but it worth the effort to see Borromini's great masterpiece.

Haven't visited yet? Have questions about Church of Sant'Ivo alla Sapienza? Ask them here!