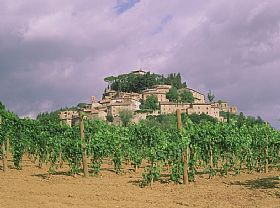 Cetona is a typical mediaeval town nestled at the foot of the mountain bearing the same name. It is particularly loved by tourists who, besides enjoying the charm of this little town, also take delight in the peace and quiet of the surrounding countryside.

Its unusual conical shape with the houses built in such a way as to form an attractive decorative effect, is without doubt what attracts them to this fascinating architectural gem.

At the top of the town a pine wood dotted with cypress trees surrounds the fortress, symbol of the town and its ancient history.

The fortress and the town were originally protected by no less than three defensive walls. The hub of this little “city” is Piazza Garibaldi with its workshops, small stores and buildings of historical interest.

On the opposite side of the piazza stands the eminent 18th century Palazzo Vitelli. Further on, to one side, lies Villa “La Vagnola” or Palazzo Terrosi as it is otherwise called. The gardens are open to the public at specific times during the summer.

At the end of the piazza lies the 16th century Torre del Rivellino, the last remaining vestige of the third wall of defence. A steep slope leads from the piazza to the true historic centre of the town where the Town Hall and the Prehistoric Museum of Mount Cetona are located inside the 17th century Palazzo Minutelli.

Further along is the collegiate church of Santissima Trinità, built between the12th and 13th centuries in the Romanic style and with a single nave, a second nave was added on the left hand side in 1571. It contains several frescoes of the late 15th century including a Madonna of the school of Pinturicchio.

Still further along, the street is crossed by a small arch, l’Arco del Brugi, a common architectural feature formed when the necessity arose to join two buildings on opposite sides of the street. Beyond lies the “Costa dell’Arciprete” which leads through “Lo Stradone” to the neighbourhood of “Le Monache” (the Nuns), so called because it originally contained a 16th/17th century nunnery of the Domenican order.

Before returning to Piazza Garibaldi, no visit would be complete without a stop in Piazza Paré or parere (opinion). The name derives from the fact that in the past, it was often used to discuss and take decisions on any questions regarding the town and its people.

“La Rocca”, the 10th century fortress, with its imposing keep surrounded by a spacious garden, dominates the town.

Haven't visited yet? Have questions about Cetona? Ask them here! 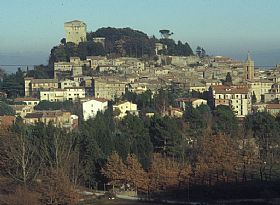 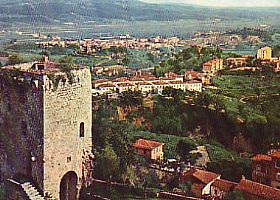 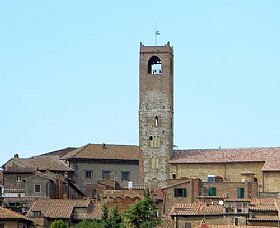