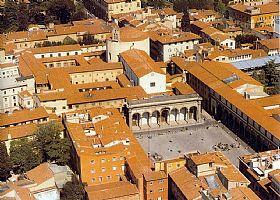 This stunning basilica was founded by the order of "Servants of Maria" in 1250 and rebuilt by Michelozzo between 1444 and 1481. The atrium shows magnificent frescoes made by excellent mannerist painters such as Rosso Fiorentino, Andrea del Sarto and Jacopo Carrucci, known as Pontormo. The most popular are "the Arrival of the Magi" (1511) and the "Nativity of the Virgin" (1514) by Andrea del Sarto.

The interior is dark and richly decorated , with a marvellous frescoed ceiling completed by Piero Giambelli in 1669. The chapel of Annunziata preserves one of the most worshipped relics in Florence: a fresco representing the "Annunciation", started in 1252 by a local monk and finished, according to the legend, by an angel. The choir introduces nine chapels: Madonna del Soccorso was restored by Giambologna, who made it his own tomb and contains bronze reliefs and a cross carried out by himself.

From the north transept door of the church you'll reach the "cloister of the dead", so called because anciently used as cemetery and paved with gravestones. The splendid fresco on the portico entrance is another oeuvre by Andrea del Sarto. Painted in 1525, the fresco represents the Holy Family's rest during the flight into Egypt and is known as "Madonna del Sacco", because of St Joseph's position (resting on a cloth bag).

The Chapel of the Company of St Luke, a few steps away, used to home the ancient Academy of art and drawing (1563-1784) and every year, in occasion of the celebration of St Luke, the 18th of October, is held a special mass for the artists. The crypt, among other artists, hosts the mortal remains of Benvenuto Cellini.

Haven't visited yet? Have questions about Church of Santissima Annunziata? Ask them here!

Enjoy the comfort of a vacation home in Florence.