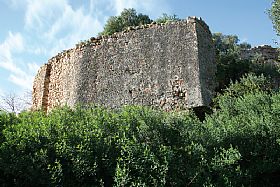 On the top of a granite hill just south of Lotzorai are the ruins of an ancient fortress called Medusa’s Castle. The crumbling stone walls are all that remain of a place steeped in legend. The fortress was called Ogliastri Castrum in the Middle Ages. It was built along the border of the mountains in a strategic point. But before the medieval era there was a Punic fortress here from the 5th to 2nd centuries BC. It became the military headquarters of the Romans under Sulpicius Portus. It continued to be used in the Byzantine period against attacks by the Barbarians from the sea.

Around 1000 the “new” castle was constructed, a true castello for the counts of Cagliari, which was destroyed by Saracens. They rebuilt it heartier and more fortified than before, with encircling walls. It blended into the rock and topography of the mountain itself.

For a period it belonged to the powerful Simondi family, then the noble Visconti of Ogliastra. It passed to Genova and Pisa, mighty maritime powers who made their empires in the Middle Ages, before being conquered by the Aragon’s of Spain.

It remained in use through the centuries, until the Unification of Italy, when it was abandoned and fell into ruins, but the location and setting are worth a walk to visit it, and enjoy the tranquility of the place and a picnic among the crumbling remains.

Haven't visited yet? Have questions about Castle of Medusa? Ask them here!

Have you seen our self-catering apartments in Sardinia?