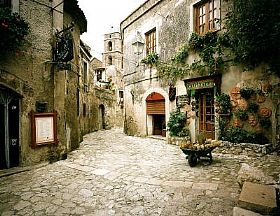 Caserta Vecchia (literally the old Caserta) at the foot of Mount Virgo, is a splendid medieval and very well-preserved hamlet founded by the Longobards in the VIII century.

This enchanting village, at only 10 km from the Royal Palace of Caserta, built over a pre-existing Roman hamlet, offers a great view of the plains of Caserta. You will be mesmerized by its rustic simplicity and the silence in which every house is wrapped!

In 879 Caserta was given to the Count Padulo of Capua but, after many Saracen incursions and the destruction of Capua, the inhabitants along with the local clergy were forced to refuge into safer places, like mountain caves. After these events the population increased more and more, so that even the Holy See moved there.

In 1062 Caserta Vecchia was conquered by Riccardo I of Aversa: from that moment the Norman domination began and the town reached its maximum splendour (1100-1129). The imposing cathedral was built in that period, consecrated in 1153 and dedicated to St Michele Arcangelo.

The cathedral is a lovely synthesis of Arabic, Norman and Sicilian art: the façade is adorned by noteworthy sculptures, and the cupola, with grey and yellow stones, offers a nice chromatic effect. The bell-tower reveals some Gothic influences, while inside you'll be able to admire numerous works of art and a stunning pulpit, remade in the XVII century with parts of ambones dating back to many centuries before.

Riccardo I was succeeded by many other feudatories until 1232, when Caserta Vecchia was conquered by the Swabians and Riccardo di Lauro, that increased the fame of the town and made it even politically important.

The castle was built for want of this lustrous feudatory: it was composed by four warning towers, positioned in direction of the cardinal points and were a safe bulwark against any attempts of enemy incursions. Nowadays there are remains of some XIII century double lancet windows, from where the majesty of the ancient tower stands out.

In 1442 the village went through the Aragonese domination and then began its way down: the citizens (followed by the clergy and the See, in 1842) moved towards the plain, to follow the quick economic development.

After the Bourbon domination in the south of Italy and the creation of the Royal Palace, Caserta became the new centre.

The best time to visit Casertavecchia is between the end of August and the beginning of September during the suggestive theatrical and musical event of "Settembre al Borgo": national and international artists come from everywhere to perform and delight ears and eyes of thousands of spectators!

Do not miss the Chapel of St Rocco, with the characteristic structure at one portico; the splendid panorama of Caserta from Piazza del Poggio; Piazza Vescovado nearby the cathedral, with the ancient granite columns symbolizing the "privilegium immunitatis" - right of sanctuary of the church; The Churches of St Giacomo and Annunziata.

Haven't visited yet? Have questions about Caserta Vecchia? Ask them here!