The Royal Palace of Caserta 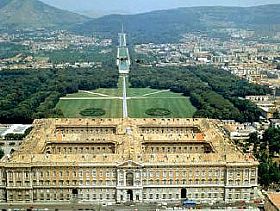 A splendid palace, a gracious garden, and all the opulence you'd expect from a royal residence is found at the Palace of Caserta. It was built by King Charles when he took the throne of the Kingdom of Naples, wanting to establish a prestigious place that would be "fit for a Bourbon king". The magnificent mansion and gorgeous gardens were meant to rival the splendor of Versailles and act as a symbol of the new kingdom.

Charles enlisted the architect Luigi Vanvitelli to design the palazzo; the foundation stone was laid on January 20, 1752, on the king's 36th birthday. He personally oversaw the initial construction with exacting attention, but when the Spanish king died and Charles assumed the kingdom, he let the Caserta project lapse when he hurried off to Madrid. The death of Vinvitelli also stalled the construction until his son, Carlo, took over and completed it. It was completed in 1780, a sprawling residence and court of 1200 rooms with four interior courtyards, a chapel, a hunting lodge, a silk factory and a small, opulent theatre built to mimic the Teatro San Carlo in Naples. A grand, ramped staircase gives a stunning first impression when you enter the building, which boasts a Renaissance-style symmetry on the facade but with Baroque decor inside.

The palace and grounds are so impressive that they were named a UNESCO World Heritage Site. Self-guided tours allow you to tour the home and see some of the gold and marble splashed rooms, including the Throne Room and the Royal Apartment, which consisted of 25 rooms. A library contains 10,000 volumes. But the highlight is the sprawling garden which stretches out behind the palace for three kilometers and comprises 250 acres (100 hectares). A line of reflecting pools are skirted by sculptures, culminating at a waterfall at the far end of the grounds. The formal gardens are meticulously landscapes, while forests abound at the borders. There are so many fountains that an aqueduct was built to feed them all. There are hidden corners, sculptures scattered about, and exotic plants to enjoy. An artificial lake was used to stage mock naval battles for the entertainment of the court.

The complex includes a bookshop and restaurant, a bicycles can be rented to fully explore the grounds. The Royal Palace of Caserta is just a 45-minute train ride from Naples; you can walk from the Caserta station in five minutes. Formally known as the Reggia di Caserta, it is open from 8:30 am to 7:30 pm daily; the grounds are open until an hour before sunset. Closed January 1, Easter, May 1, and Christmas Day.

Haven't visited yet? Have questions about The Royal Palace of Caserta? Ask them here!