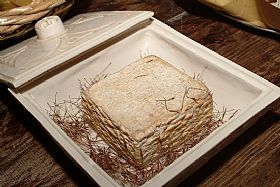 Cacio Fiore is a cheese with a history. A sort of precursor to today's saltier and harder Pecorino Romano, it was a popular cheese in ancient Rome. Two thousand years haven't changed the production method of this fabulous formaggio, however.

Produced from October to June when the lambs are milking, it is created with raw sheep's milk with the rennet obtained from full-bloom artichoke blossoms. It is usually formed into squares. It is traditionally aged in straw nests for 30 to 80 days. The resulting cheese has a golden rind and a soft, intensely creamy interior. It bears the scents and flavors of the artichoke and the field foliage that the sheep graze on. Cacio Fiore's ancient tradition remains the same, and so does its production zone - it's a cheese found in the countryside of Lazio, the region surrounding Rome.

Haven't visited yet? Have questions about Cacio Fiore? Ask them here!