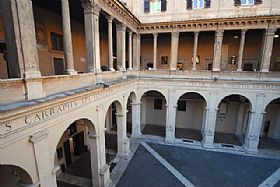 Il Chiostro del Bramante is a Renaissance respite in the heart of Rome. Attached to the church of Santa Maria della Pace, it is just a few steps off the famous Piazza Navona and yet remains a bit obscure. The beautiful building is now used for art exhibits, concerts and meetings, but once served as the internal tranquil cloister for the adjacent church, which contains frescoes by Raphael and a redone Baroque facade by Pietro da Cortona.

Bramante's Cloister was added in 1504 and was his first commission in Rome. He created an elegant, classical space of porticoes with arches. The ground level has Ionic columns and vaulted ceilings in the arcade, while the upper level has Corinthian columns. The effect is one of a Greek temple crossing Renaissance splendor for this oasis of calm in the city.

The Chiostro del Bramante is a great place to go for a cappuccino, as there is a nice cafe where you sit in the arcade overlooking the interior of the cloister. They also serve pastries and light lunches, and offer free WiFi. Pop into the reading room where a window looks down in the church, right at the famed Sybils of Raffaelo, giving a unique lofty view of the fantastic frescoes.

There is no charge to enter the cafe, while an admission is charged for the special exhibits in the building itself. The Cloister of Bramante is open Tuesday through Sunday from 10 AM to 7 PM; on Fridays and Saturdays it is open until midnight. Closed Sunday.

Haven't visited yet? Have questions about Bramante's Cloister? Ask them here!