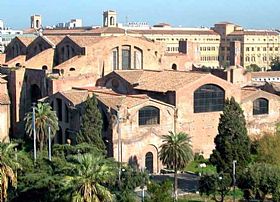 In the bustling heart of Rome rests the once-thriving bath complex of Diocletian. The public bathing structure was built by the Emperor Diocletian between 298-306 AD; once completed it was the largest spa structure in the Roman world. It sprawled over 13 hectares (32 acres) and could accommodate 3,000 people at any one time. It boasted a pool of 3500 square meters (that's about 37,000 square feet!) along with smaller bathing pools of alternating hot and cool water. There were gymnasiums, libraries, and courtyard gardens, as well as a stepped central portico that may have been used for theatrical performances. It was quite a plush complex in its day.

The enormous construction project required the demolition of an entire neighborhood and alteration of the existing road structure. It was entirely built in brick and served the Esquiline and Quirinale quarters of the ancient city. Now it sits in front of Termini, the main rail station, and stretches to Piazza della Repubblica. The baths were in use until 537 when the invading Goths destroyed the aqueducts. The complex later became a quarry of convenient building material for subsequent constructions in the city.

An interesting preservation project took place in 1560, however, when Michelangelo was commissioned to design a church there. He utilized a large portion of the remaining ruins and creatively carved out the space using the original niches and vaults of the baths. The church of Santa Maria degli Angeli is a large, luminous space that conserves the granite columns that once supported the roof. It's entrance is set in the original semi-circular half-domed section that formed part of the complex. The right transept holds the Meridiana, a solar calendar that was the city's timekeeper until 1846 but still accurately portrays the hours by the sunbeams (accounting must be made for modern daylight savings time). The soaring interior is airy and a unique use of the historic space.

Behind, in the rest of the remains is the Museo Nazionale Romano, which displays archeological artifacts from the Roman era.

Haven't visited yet? Have questions about Baths of Diocletian? Ask them here!