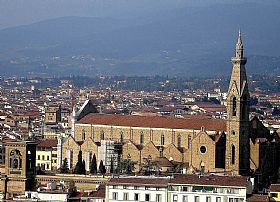 The basilica of Santa Croce is one of Florence's most famous churches and the destination of millions of visitors annually. The Gothic church is a monument to Florence's wealth and influence during her heyday, and a lasting memorial of great Florentines through the centuries.

The church started life as a small Franciscan church; legend says that St. Francis himself founded the congregation. It flourished and outgrew the original church, so the construction was begun in 1294 with funding provided by the city's wealthiest families. It sits in the center of the city, and was the center of spiritual, cultural and social life for the neighborhood.

Santa Croce became a veritable who's-who of Florentine artists. Donatello, Giotto, Vasari, and Canova contributed creative works, along with Cimabue, della Robbia and Gaddi. From frescoes to sculptures, the artwork is contained in the church is more prestigious than you'll find at many museums. Brunelleschi designed the separate Pazzi Chapel, set in the cloistered courtyard.

But the church is also known for the illustrious Florentines buried here, with memorials to their genius or influence. Galileo, Michelangelo and Machiavelli are the most famous characters laid to rest within its walls, but architect Leon Battista Alberti, composer Giachino Rossini, and artist Lorenzo Ghiberti are also entombed here. There is a monument to Dante, an empty tomb dedicated to the Florentine poet known for The Divine Comedy; he died in exile in Ravenna. And there is a memorial dedicated to Florence Nightingale who was named for the city where she was born.

A visit to Santa Croce is a must for art lovers, not just for the art inside the church but in the accompanying museum located off the cloister. The church has seen seven centuries of history and remains one of Florence's most beloved places.

Haven't visited yet? Have questions about Basilica of St Croce? Ask them here!