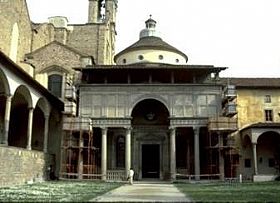 The Pazzi Chapel is a lasting monument to the classical styling of the Renaissance. Commissioned by Andrea Pazzi, the head of the family whose wealth was second only to the Medicis, it was built as a legacy of their power and patronage in an era of opulence. To complete the task, he hired the eminent architect of the day, Filippo Brunelleschi, who also designed and built Florence's cathedral with its dominating dome, Santa Maria del Fiore. Brunelleschi was known for his use of linear perspective and his ingenuity at employing new engineering feats to his works. He invented a hoisting machine to complete that enormous dome. Brunelleschi is buried in the cathedral.

The Pazzi Chapel is a small but perfectly proportioned building employing sound geometric plans using squares, rectangles and circles. In short, it's a near-perfect example of Renaissance symmetry. Work was begun in 1443 and completed in 1460, after the death of the famous architect. The temple-like structure is encased within the ecclesiastic complex of Santa Croce, the great Gothic church which holds some of Florence's most famous tombs and frescoes. The Pazzi Chapel is set in the quiet cloister and is flanked by an arched portal topped by a loggia. The portal bears domed and decorative elements as a grand entryway.

Windows were carefully placed to allow natural light to filter in, giving full effect to the dome, which is capped by a lantern. Embedded around the dome are ceramic inserts by Della Robbia. Another low dome over the altar has a fresco of the constellations over the Florentine skies.

A charming piece of architectural and Renaissance history, the Pazzi Chapel is a perfect example of that era's emphasis on classic lines.

Haven't visited yet? Have questions about Pazzi Chapel? Ask them here!

Have a look at our apartment rentals in Florence.