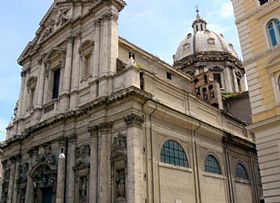 Rome's first Baroque facade was inaugurated on the church of Sant'Andrea della Valle. Located on Corso Vittorio Emanuele, just a few steps from the famed Piazza Navona, the fanciful facade is decorated with plaster sculptures and ordered rows of columns. It was named for the nearby residence of Cardinal Andrea della Valle, whose name is inscribed above one of the windows on his former palace.

Built between 1591 and 1596, the church was a collective effort by architects Francesco Grimaldi and Giacomo della Porta. The dome, which is Rome's 4th largest, was designed by Maderno while the lantern was overseen by Borromini. The famous facade was added by Carlo Rainaldi.

The vault and dome are fantastically frescoed, with the cupola displaying the Glory of Paradise by Lanfranco. The last chapel on the left is the Barberini Chapel, which was Puccini's backdrop for the first act of his famous opera, Tosca.

Haven't visited yet? Have questions about Basilica of St Andrea della Valle? Ask them here!