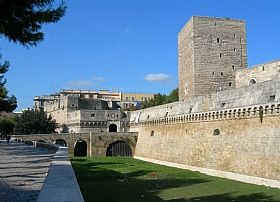 On the edge of the historic center and just a few steps from the harbor sits one of Bari's most defining landmarks. The Norman-Swabian Castle, as it is known, is an extensive and formidable structure that guarded the city for centuries. It's also the most prominent and dominating of the many seafront fortresses that line up along the Puglian coast.

Using the foundation and the site of a Roman outpost, the Norman king, Roger II, commissioned its construction in 1132. It didn't last long, as the city revolted against the Normans, siding with William I of Sicily, who razed it in 1156. During the Swabian rule, Frederick II, a great aficionado of architecture who had a penchant for castle-building, rebuilt it in a more extensive manner in 1233. Following his reign, it was passed around among the various rulers and nobles, finally landing in the lap of the Kingdom of Naples until Italy's unification.

The impressive structure is vast with an internal courtyard, sprawling ramparts and a moat complete with drawbridge. Inside are some monumental sculptures and other Puglian artifacts, and there are occasional special exhibits on display. A video explains the history of the castle, giving some details you might otherwise miss.

Located right on the edge of the centro storico, it's an easy walk to the other main sights of Old Bari as well as the city's port and seafront promenade.

Haven't visited yet? Have questions about Bari's Castle of Frederick II? Ask them here!