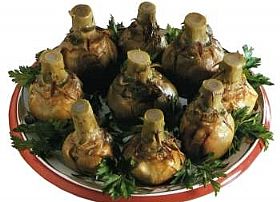 During the Renaissance artichokes became very expensive because they were believed to have therapeutic powers, making them accessible only to the wealthy who could afford them. Catherine de' Medici of Florence toted artichokes, along with Italian cooks to prepare them, with her to Paris when she married the king of France. Now they're available to anyone willing to do the work to clean them!

The variety of artichoke found around Lazio and Rome is called the Romanesco and is a bulbous type which has no thorns. This recipe is a very popular dish in Rome, hence the name Roman-style (alla Romana). It's fairly simple to prepare and comes out delicious every time.

Prepare the artichokes by removing tough outer leaves. Dip them in water and lemon juice so they won't blacken.

Mince the garlic, mint and parsley. Slightly open the leaves of the artichokes, place the chopped herbs and salt in the center and close them. Place the artichokes upside down, very close, in a high-sided pan. Sprinkle with salt. Add about 1/3 cup of olive oil, t hen add water to about half-way up the artichokes. Put the lid on and bake at 200 degrees celsius (about 400 fahrenheit) for one hour. After cooking, the water will be almost completely evaporated. They are delicious served either hot or cold!

Artichokes alla Rromana can also be cooked on the stove over low heat.

Haven't visited yet? Have questions about Artichokes alla Romana? Ask them here!