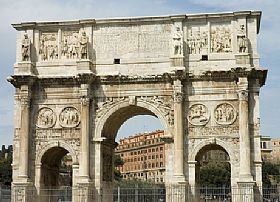 A triumphal arch sits next to the Colosseum at the entry to the ancient city, the Arch of Constantine is the largest and most recent of the Roman arches. The arch was built to celebrate the triumph of Emperor Constantine in the battle of Ponte Milvio, in 312 AD. An inscription reads "by divine inspiration" (instinctu divinitatis mentis), which Constatine believed was the source of his improbable victory, following which he halted persecution of Christians and declared Christianity the official religion of the Empire.

The marble arch is the largest of the triumphal structures, with three archways under which the victors would march when they returned to the capital. It was dedicated in 315. The statues at the top were scavanged from Trajan's Forum. the other reliefs and statues were created for Constantine's heroic occasion, depicting scenes of battle, the glory of the empire and Constantine's troops driving the soldiers of Maxentius into the Tiber River.

The ancient decorative structure is still standing, a few millennia later, testifying of the greatness and might of the Roman Empire.

Haven't visited yet? Have questions about Arch of Constantine? Ask them here!