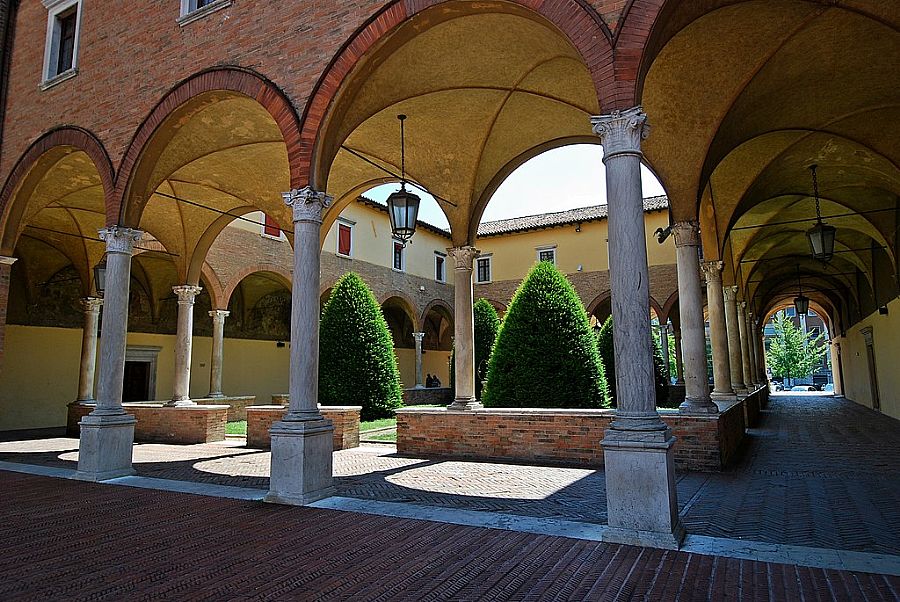 Located in Piazza Aurelio Saffi in the heart of Forli', the church is a symbol of the city and one that is revered throughout Emilia-Romagna region. It's status is that of minor basilica. The church has a graceful line that is punctuated by the tall Lombard bell tower. To the right is the lovely arcaded courtyard, like an open cloister.

The church was first documented in 1894 when the archbishop of Ravenna donated funds to the abbot, and it was mentioned in a codex in 962 speaking of land being donated to the abbey. The church and much of Forli was destroyed in 1173 during a heavy Guelph-Ghibelline conflict. The abbey was established as a Benedictine monastery 11th century grew in importance, building a church, monastery and lodgings for pilgrims in the 1180s. Located on the main piazza, it quickly became an important and influential monastery and part of the city's fabric.

In 1505 the apse collpased and was quickly rebuilt. In 1646 the Romanesque facade was given a modern makeover in Baroque style. The church's plan bears three naves and three apses. A restoration was undertaken of the facade in 1915-20 that shaved off the Baroque frills to return it to the original Romanesque style.

In the lunette are relief sculptures of the adoration and dreams of the Magi. Inside are frescoes and paintings by local masters, and a highlight is the beautiful courtyard with cross-vaulted porticoes and columns, a truly pretty sight.

Haven't visited yet? Have questions about Abbey San Mercuriale Forli? Ask them here!