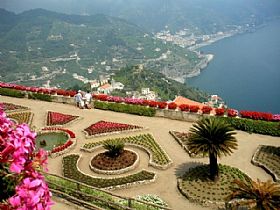 Villa Rufolo takes its name from an ancient family of Ravello, rich and powerful in the times of the Maritime Republic of Amalfi.

The villa suffered carelessness and degradation until, in 1851, the Scottish Francis Neville Reid bought it and brought it again to the ancient splendor.

In 1880 Wagner, who stayed in the Villa for some time, remained astonished by the extraordinary glamour of the place and here he found the inspiration to compose the second act of the "Parsifal". From that time, the Villa continued to attract visitors and artists and personages as Jacqueline Kennedy and Hillary Clinton.

The gardens of the villa set the scenery for the Ravello Festival.  Performances of classic music and ballets of the highest level take place at night, with the orchestra playing on a stage hanging between the sky and the sea.

Haven't visited yet? Have questions about Villa Rufolo? Ask them here!

Enjoy the comfort of a home rental in Ravello.